Technology is a part of our daily life, and machines and processing units are no exception. Technology has changed the way the manufacturing sector works and helped increase efficiency and accuracy across manufacturing units. Just how production lines are automated, cleaning processes are also integrated with technology. Cleaning of components using heat has been in practice since decades.

Burn-off ovens are used in various industries to remove certain flammable materials such as paint and grease from parts and components by heating them at very high temperatures. Over the years, there have been several technology upgrades to these ovens, which have helped improve their safety, efficiency, thus popularity among industrial clients. The One Touch Control technology is one such that has revolutionized burn-off oven designs.

What Is One Touch Control Technology?

One-Touch Control (OTC) technology is a control system used in burn-off ovens. It has automation features that include self-adjustment, load adjustment, vapor sensing, estimation of combustible material, and so on. This can function autonomously, once started, without any human intervention. 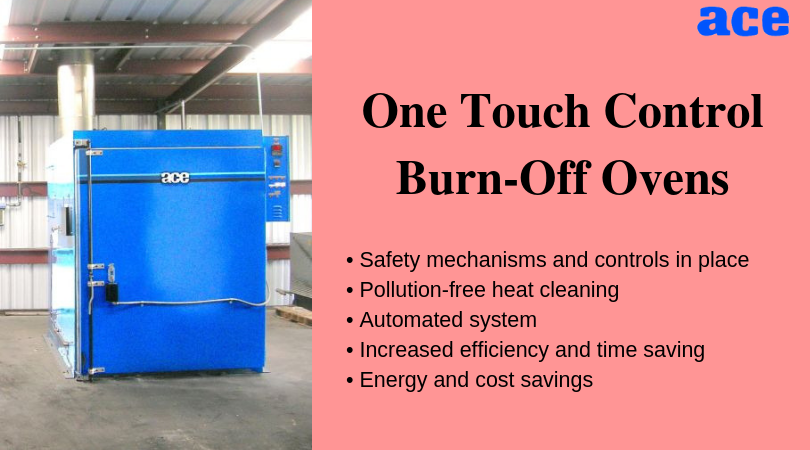 Features of OTC in Burn-Off Ovens

Here are some features of OTC-based burn-off ovens:

Why are One Touch Control Burn-Off Ovens Gaining Popularity over Other Technology Ovens?

The One Touch Control burn-off ovens offer several advantages over ovens that are driven by technologies such as ramp & soak control, rate-of-change control, and batch cycle timer control. The following are a few advantages of these ovens:

Using technology in the right manner and proportion has always been a boon for businesses. The burn-off oven by itself has been an innovation, and the much obvious technological integration only furthers it.  There are many burn-off oven manufacturers and suppliers from where you can get custom burn-off ovens made to suit your exact requirement.

Why Are One Touch Control Burn-Off Ovens in Demand? was last modified: November 21st, 2018 by Scott Heran

Scott Heran has been part of the business since he was young and attending industry association conventions with his parents Bob and Jean since he was eight years old.Scott has worked in a sales capacity at ACE for over 20 years. Scott graduated from John Carroll University. Married to Teresa, he is the proud father of two children and two grandchildren.